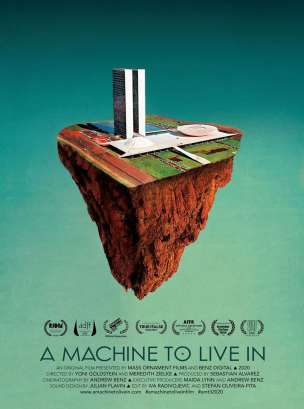 BBFF21: A Machine To Live In

A Machine to Live In is a documentary feature about cosmic dreams and mystical architecture at the heart of Brazil’s remote wilderness. Through an emergent polyphonic text composed of four historical personalities, the film moves from the hyper-designed, space-age city of Brasília to the vast and flourishing landscape of UFO cults, spiritist temples, and utopian outposts.

Brasília, a sixties-era megaproject, is a crumbling monument to an obsessively rational dream of state power. Lined with massive concrete domes, pyramids, and geometric “superblocks,” the city resembles a highly-planned moonpad in some outdated sci-fi vision of the future. A future where an ultra-rational urban design produces the ultra-rational citizen, living harmoniously in machine-like order. Yet the people who arrived to witness this utopian project in the hinterlands were themselves possessed by their own powerful visions of the future. Over the decades that followed, this region of Brazil became home to the densest concentration of new religions, cults, and transcendental movements in the world.

The film examines these utopian relics as if it were a sentient data processor, assembling fragments of texts, songs, and interviews from four iconic witnesses to Brazil’s experiment in world making: the writer Clarice Lispector; the cosmonaut Yuri Gagarin; and the followers of linguist L.L. Zamenhof, inventor of Esperanto; and Tia Neiva, Brazil’s first female truck driver and charismatic cult leader. Through these oneiric visions, the film describes a destabilizing multitude of futures: “I have never seen anything like it in the world.” Lispector writes, “But I recognize this place at the very core of my dreams.”

A Machine to Live In unfolds like a feverish prophecy through multiple ideologies and languages, connecting prescient historical moments to the daunting realities of modernity.