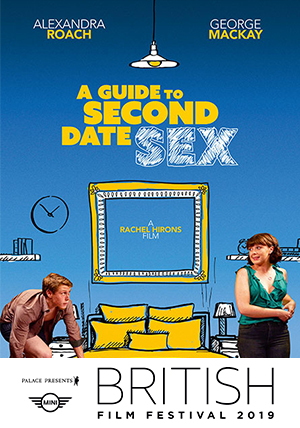 Exciting British talent George Mackay (Captain Fantastic, 2016, Sunshine on Leith, 2013) and Alexandra Roach (The Iron Lady, 2011, Testament of Youth, BFF14, and television’s upcoming Black Mirror) lead a cast of rising stars in this delightful crowd-pleaser comedy.
Laura (Roach) and Ryan (Mackay) are perfect for each other: they both love Meryl Streep, have been totally destroyed by previous relationships, and they have no idea what they are supposed to do tonight. They also both know that they’ll have to pretend to be completely different to how they’ve ever been previously, in the hope of getting it right this time. But Ryan and Laura are about to find out how bad a second date can really go.
Also starring British television darlings Emma Rigby (Once Upon a Time in Wonderland, 2013) and Kae Alexander (Game of Thrones, 2011, Bad Education, 2012) among others, this debut film from director Rachel Hirons is an adaptation of her own critically acclaimed play which enjoyed sold-out shows at London’s Soho Theatre and the Edinburgh Fringe Festival. The perfect date night movie!