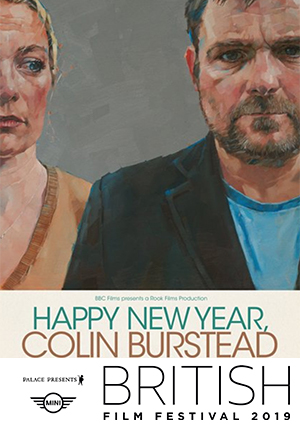 Acclaimed director Ben Wheatley (High-Rise, 2016) presents a domestic drama with a sharp comedic streak in this tense ensemble piece about a dysfunctional family reunion.
Colin Burstead, played by standout Neil Maskell, has decided to hire a lavish country mansion to reunite his extended family and friends to ring in the new year. Burstead family gatherings are usually explosive affairs, but Colin is determined that this one will go smoothly. Unfortunately, from the moment of arrival, things begin going wrong. His parents are perpetually dissatisfied, Uncle Bertie is secretly ill, and the self-deceiving Sham has gate crashed the party in the hope of winning back his ex-girlfriend Lainey who is doing the catering. Worst of all, Colin’s sister Gini (Squires) has invited the very person that Colin wanted to exclude: their black-sheep brother David (Sam Riley) whom Colin hasn’t seen for five years. David’s arrival brings conflicts which, as the drinks steadily flow, simmer gradually toward an inevitable explosion.
Using intimate and dynamic handheld camerawork to elevate the tension, Wheatley produces an atmospheric spectacle that crackles with impending doom resulting in an enthralling presentation of family misfortunes.

"Ben Wheatley strips things back for his nerve-raddled family reunion comedy, and the result is one of his best, most fluid films."