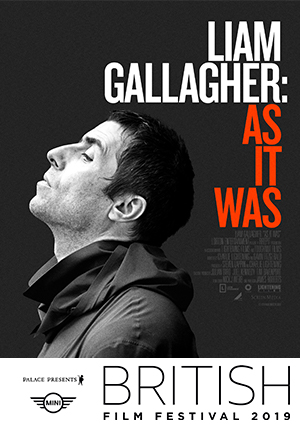 BFF19 Liam Gallagher: As it Was

Musician documentarian Charlie Lightening joins forces with Gavin Fitzgerald (Conor McGregor: Notorious, 2017) to result in this disarming portrait of Liam Gallagher. Following the star over the space of a decade, we see the man installed as a rock god in his 20s suddenly confronted by a question familiar to mere mortals of a certain age: what next?

Beginning from the explosive Oasis split, it covers Liam’s journey with Beady Eye, his Pretty Green fashion line, and failed marriage up to his 2018 solo debut album, As You Were.
Coming from the dizzying heights of his `champagne supernova' years, the star is progressively confronted with his own humanity, as amidst his endlessly charismatic swagger, a newfound humility is revealed. With an unvarnished honesty, Gallagher embarks on a quest for maturity as he starts writing songs and finds an ally in unflappable partner-manager Debbie Gwyther. This is the star’s revealing and entertaining expedition from the wilderness of booze and legal battles to his attempt to stage the greatest comeback in rock history.