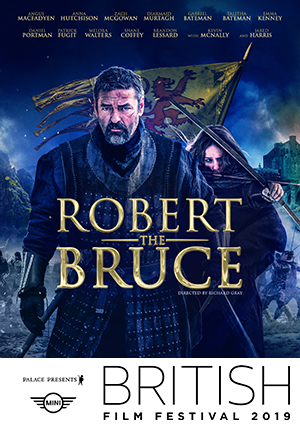 Angus Macfadyen reprises the role he played so memorably in Braveheart as Scottish leader Robert the Bruce in this retelling of the legendary story which premiered at the 2019 Edinburgh International Film Festival.
It’s 1306 and King Robert’s forces have been decimated. His slaying of rival John Comyn (Jared Harris) was an act that makes him an outlaw, and in the lost months after, the injured King finds himself hunted across the snowy Highlands. He takes shelter with stoic Morag (Anna Hutchison) and her brave children, a family hitherto more allied with the English, who restore him to health and help him find the resolve to rally the Scots and lead them to independence.
Helmed by Australian director Richard Gray (Sugar Mountain, 2016), this atmospheric film also boasts Jared Harris (Sherlock Holmes: A Game of Shadows, 2011, Mad Men series) and Zach McGowan (The Walking Dead series) and features a rousing orchestral score resulting in a true spectacle that builds on the emotion of Braveheart and brings to life a dramatic piece of history.