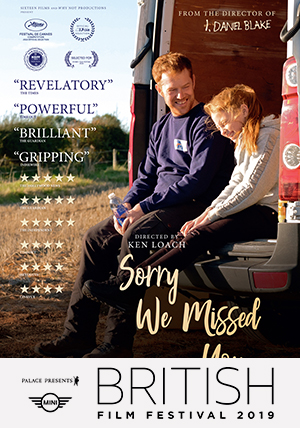 BFF19 Sorry We Missed You

Ken Loach returns after his Palme D’Or-winning I, Daniel Blake (BFF16), with another brilliant study of a struggling working-class couple caught in a hopelessly exploitative system.

Ricky (Kris Hitchen) is a former construction worker in Newcastle, UK, who lost both his building work and his chance of a mortgage after the economic crash of 2008. Easily impassioned, with a liking for the drink, he is nevertheless proudly hardworking, and loves his two kids and wife Abby (Debbie Honeywood), an overworked contract nurse and in-home carer. When Ricky takes a golden opportunity to buy a van, start his own business, and become a freelance deliveryman, things don’t quite work out as planned, and his already dire situation takes a turn for the worse. As the impossible demands of the job edge him further into debt and push his family’s relationship to the brink of collapse, we can only watch as his and Abby’s hopes turn from to confusion and despair.

Lauded with outstanding reviews internationally, this tale is a stirring example of the honesty and humour for which the director is known best.