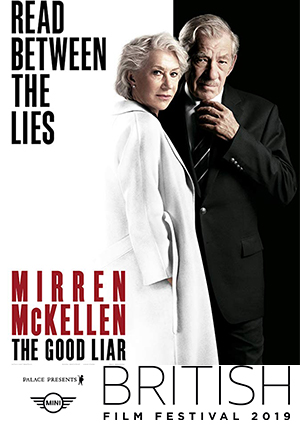 Based on the widely acclaimed novel by Nicholas Searle, Oscar-winning screenwriter Bill Condon (Gods and Monsters, 1998) directs this wicked thriller featuring magnificent lead performances from Sir Ian McKellan and Dame Helen Mirren.
Career con artist Roy Courtnay (McKellen) can hardly believe his luck when he meets the wealthy widow Betty McLeish (Mirren) on an internet dating site. Initially to Roy, Betty is nothing more than a lottery prize, but as she opens her home and life to him, Roy is surprised to find himself caring about her. Matters become even more complicated when Betty's grandson shows scepticism toward his grandmother's latest companion. Eventually, what should be a cut-and-dry swindle for Roy turns into the most treacherous tightrope walk of his life.

Amidst the atmospheric settings of London and Berlin, Mirren radiates a graceful glow as the well-to-do Betty. Meanwhile, McKellan is deliciously evil as the good liar himself, taking the audience with him as he inches toward perilous waters. This is an enthralling story about the secrets we keep and the lies we are willing to tell to get what we want.