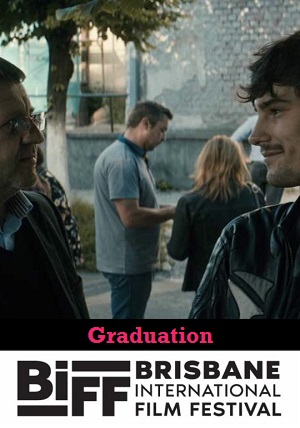 Master filmmaker Cristian Mungiu’s Cannes award-winning work is a beautiful meditation on the choices we make and their impact on ourselves and those around us.

Romeo (Adrian Titieni) is a middle-aged physician living in a tiny mountain town in Transylvania. He’s a good man, but his life and marriage are somehow simply stuck in the mud, here in this backwater where his dreams of making a difference have long since evaporated. His academically gifted daughter, however, has a chance to escape to an English university - but an incident on the eve of her scholarship exams puts that once-in-a-lifetime shot at freedom in jeopardy.

In a single chance meeting in the aftermath of this strife, Romeo could help his daughter by making a small choice - but while well-intentioned, it might not be the most principled thing to do. For Romeo, this simple decision sets off a chain reaction that moves further and further out of his control.

With a deft hand, Mungiu guides his players through an environment of social realism where the details and little decisions really matter. From a technical perspective, this is very fine filmmaking, particularly the director’s attention to performance and the always restless sound design.