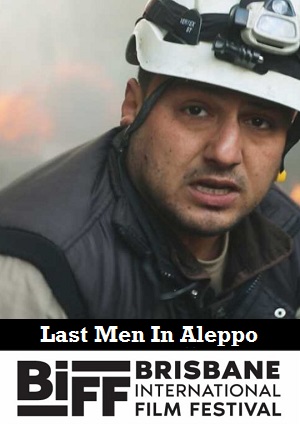 It’s been dubbed “Syria’s Stalingrad”: a city being gradually ground to dust by bombs and missiles as five years of bitter civil war rage across Aleppo.

In this city under siege, those residents who have clung desperately to their homes have little hope left – save for the indefatigable “White Helmets” of Syria Civil Defense. Impossibly brave volunteer rescuers like Khalid, Subhi and Mahmoud have bunkered down in this war-torn hell to risk everything for their fellow citizens, the first to rush towards the sound of gunfire in the hope of saving even one life.

Winner of the Grand Jury Documentary prize at the Sundance Film Festival, Feras Fayyad’s heartbreaking and visceral documentary is a searing example of boots-on-the-ground reportage, as the Syrian filmmaker fearlessly embeds his crew in the heart of the action at immense personal risk, following some of the same first responders featured in the Academy award-winning documentary The White Helmets (2016).

As these three White Helmets stride through the shock and awe of their scarred hometown, they constantly juggle the urge to flee with a need to stay and fight for the city they love.

Unflinching in its brutal and often grim honesty, and white-hot with heart-pounding suspense, this affecting, poignant and timely film pushes in behind the numbing newspaper headlines and puts a human face on a distant conflict.