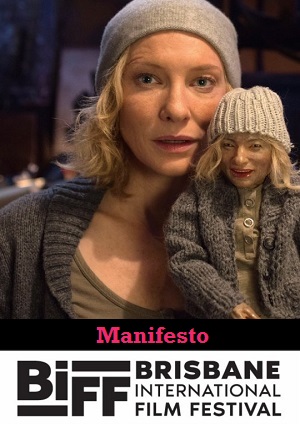 What started out as a seven-screen gallery exhibition is now a major feature film exploring some of the world’s greatest political, social and artistic manifestos.

Here, Cate Blanchett plays twelve utterly different characters in utterly different surroundings, reciting these manifestos that are inserted into their environments as if they were meant to be. A rock groupie reciting Stridentism and Creationism, a funeral speaker reciting Dadaism, a conservative mother reciting Pop Art and a newsreader reciting Minimalism and Conceptual Art are just a few of the striking and often very funny juxtapositions and collisions constructed by director Julian Rosefeldt.

Aside from Blanchett’s astonishing performance, Manifesto leaps from the screen by virtue of Christoph Krauss’ striking cinematography, which explores architecture, space, place and emotion in very beautiful, surprising and playful ways.