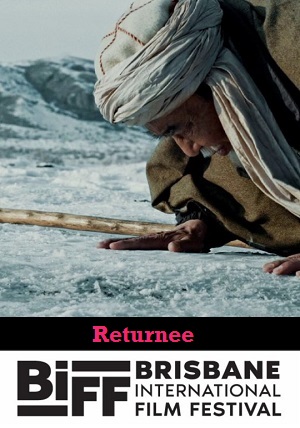 ‘Oralman’ or ‘returnee’ is an official term used by Kazakh authorities to describe ethnic Kazakhs who have immigrated to Kazakhstan since its independence in 1991.

Stunning cinematography elevates this film about a family repatriating after many years in Afghanistan back to their ancestral homeland in Kazakhstan.

After Kazakhstan gained independence in 1991, a family raised in Afghanistan, since the grandfather (Bazarbay) had sort refuge from the ‘red terror’ during the 1930’s, finally receive the long-awaited quota and receive passports to repatriate back to their ancestral home as ‘oralman’.

Saparkul, Bazarbay’s son, whose job is the ‘call to prayer’, prepares for departure and takes his wife, mute daughter and ailing father across difficult and dangerous terrain by foot; all the while his frail father talks wistfully of his beloved motherland. No-one is sure whether Bazarbay will live to see his homeland. At the border post at Turkmenistan they enter the migration police station and receive registration and travel south of the country to a nuclear station at Tore-Tam. This is the land of their ancestors. Saparkul receives a job as a security guard for the station where the family must live. It is a strange land for Saparukul and his family who must adapt. Saparkul’s daughter has not spoken since she experienced trauma in Afghanistan. Will this family assimilate to this different way of life? Saparkul finds an unexpected opportunity to give something of great importance back to the community he now calls home.