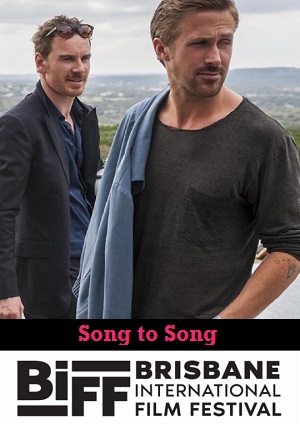 Selected as the opening night film for this year’s SXSW, Terrence Malick’s Song to Song delivers another enigmatic instalment in his polarizing oeuvre that’s included Badlands, Days of Heaven, Thin Red Line and The Tree of Life.

In this film Malick chooses the ever-cool US music capital Austin and its legendary music scene as the backdrop where two love stories intersect. With an all-star cast including Ryan Gosling, Natalie Portman, Michael Fassbender and Rooney Mara as well as a surprising appearance from Patti Smith, Cate Blanchett and many more, we traverse the loose and “in the moment” world of the rock scene as they struggle with their own careers and emotions.

Malick very much lets the story unfold naturally, which allows the players to drop facades and work directly with the environment that surrounds them. What Malick and the performance give us is an always surprising often highly experimental exploration of mood and tone which goes some significant way in delivering on Malick’s own desire to develop a new kind of visual language.