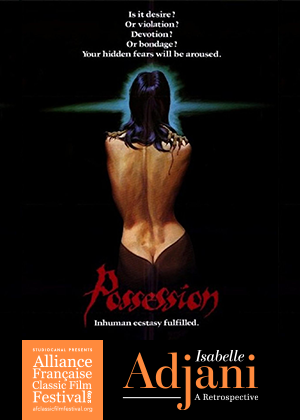 Fascinating, unrelenting, evil, deranged and perverted, this psychological horror drama defies easy classification. Exploring themes of marital breakdown, displacement, male jealousy and rage, Possession was a 1980 co-production between France and West Germany, delivered by one of the most revolutionary filmmakers to emerge from Poland after World War II, Andrzej Zulawski, and starring Adjani, who won the award for Best Actress.
The plot obliquely follows the relationship between an international spy, Mark (Sam Neill) and his young wife, Anna (played by Adjani). After requesting a divorce from her husband with no obvious explanation, Mark suspects that Anna is having an affair and sets out to uncover the truth. He decides to follow his wife, who displays increasingly disturbing behaviour. As Anna appears more and more unhinged, Mark’s suspicions of infidelity soon give way to something far more sinister.
Having been shot in the streets of Berlin, with scenes completely devoid of extras, Possession effectively conveys a sense of dislocation, isolation and unease, which serve to underpin this wild yet intimate supernatural horror.