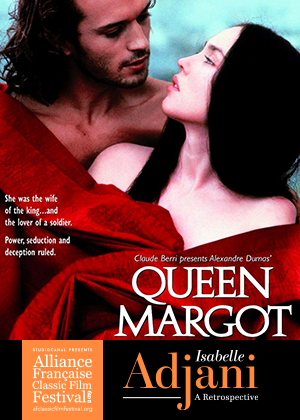 Raging with unbridled passion, sex and violence, Patrice Chéreau's multiple César winning film is a grandiose adaptation of the historical novel of Alexandre Dumas. Isabelle Adjani is luminous and fearless in her portrayal of Marguerite de Valois, cast against this ravishing bodice-ripping drama which is both powerful and provocative.
The film begins in 1572, when tensions between Catholics and Protestants are at an all-time high. The country’s ruler is Charles IX however his manipulative mother, Catherine de Médici (Virna Lisi), is the real power behind the throne. In a calculated move, Catherine marries her Catholic daughter, Marguerite to prominent Protestant Huguenot Henri of Navarre (Daniel Auteuil). This unleashes a complex series of events including various murderous plots and romantic affairs, culminating in the notorious St. Bartholomew's Day massacre when tens of thousands of Protestants are slaughtered.
Queen Margot was Chéreau’s greatest success, having won the Jury Prize at the 1994 Cannes Film Festival and five César Awards, including Adjani’s fourth Best Actress Award. Rarely has history been brought to life in such an electrifying way.