CFFF19 The Story of Adele H. 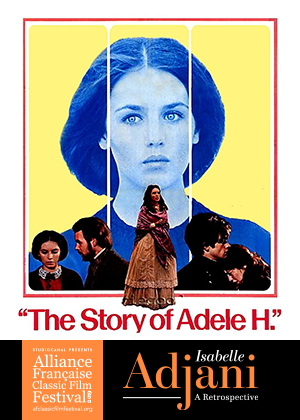 After witnessing Isabelle Adjani’s superb performance in The Slap, director François Truffaut knew that she had to star in his next film; L’Histoire d’Adèle H. Based upon the real diary of Adèle Hugo, daughter of renowned French writer Victor Hugo, the film tells the story of irrational, obsessive and destructive, unrequited love.
The film is set in 1863, where teenager Adèle arrives in Halifax to follow British lieutenant Albert Pinson (Bruce Robinson) who she is madly in love with. Despite the Lieutenant rejecting her affections, Adèle’s intense obsession only grows stronger, prompting her to spy and follow him as he is dispatched to different parts of the globe. Gradually, she succumbs to fictitious delusions where she imagines herself as Lieutenant Pinson's wife, before losing her grasp on reality entirely.
Truffaut masterfully crafts this beautiful and haunting one-sided love-story, ignited by Adjani’s portrayal as the emotionally and psychologically unstable Adèle. At only 19 years of age, Adjani received great critical acclaim for this performance, garnering an Academy Award nomination and making her the youngest Best Actress nominee ever at the time.