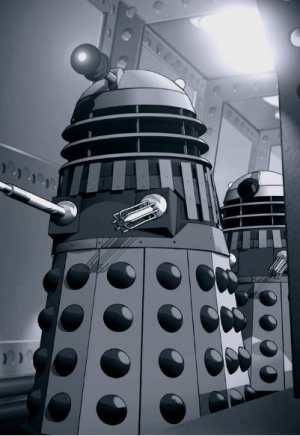 Doctor Who: The Power of the Daleks

Lost since its premiere on the BBC 50 years ago, the full six-part story has now been meticulously animated and will feature added bonus content including interviews with members of the original cast.
Thought to be lost forever, Dr. Who: The Power of the Daleks is the missing third serial of the fourth season of Doctor Who. No complete film recordings or master negatives of The Power of the Daleks are known to have survived an archive purge in 1974. This brand new animation is recreated from original audio, photographs, and surviving film clips.
The Power of the Daleks is one of the most celebrated Doctor Who adventures. The six-part adventure, presented in its entirety here as a single, feature-length event, includes the regeneration, or as it was then called “renewal,” of First Doctor (William Hartnell) into Second Doctor (Patrick Troughton). The Time Lord and his companions Polly (Anneke Wills) and Ben (Michael Craze) do battle with the Daleks on the planet Vulcan.
If that is not enough, the event will feature bonus content including interviews with members of the original cast!
So gather your friends and join your fellow fans for this exclusive cinemas event, 50 years in the making!