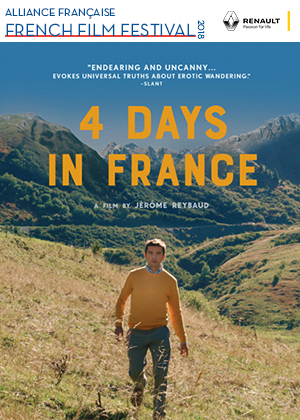 In his debut feature, director-writer Jérôme Reybaud manages to eschew gratuitous sexual encounters, despite dedicating over two hours of screen-time to a man’s roadtrip through France with only Grindr, the gay social dating app, as company. In an unexpectedly tender fashion, 4 Days in France follows Pierre (Pascal Cervo) on a sentimental journey that lasts less than a week, starting on the day he wakes up and leaves his partner Paul (Arthur Igual), jumping behind the wheel of his Alfa Romeo to travel through France. With no particular destination in mind, Pierre relies on Grindr to arrange his ‘liaisons’ along the way but, unbeknownst to him, Paul is also using the app to keep track of Pierre’s movements. After four days and nights of random hookups
– sexual and otherwise – will the two find each other again? With the undulating mountains of provincial France as a romantic backdrop, this film offers an insight into how gay men living outside urban centres navigate their sexuality. An eclectic cast – including Nathalie Richard and Lætitia
Dosch, also appearing in this year’s Festival in Montparnasse Bienvenüe – add colour to Pierre’s travails.