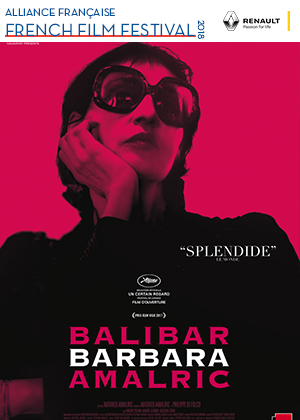 A dreamy film-within-a-film biopic of a mononymous chanteuse, Barbara is the third film directed by one of France’s most respected actors, Mathieu Amalric (known to many English-speakers for his villainous turn in the James
Bond film, Quantum of Solace). Teaming with his former off-screen wife, Jeanne Balibar – who ably shoulders the lead-within-a-lead – this is a visually striking homage to a music icon.
Brigitte (Jeanne Balibar) has been cast to play the title role in an upcoming film based on the life of Barbara. As the film’s director, Yves (Mathieu Amalric) – himself obsessed with Barbara – drives Brigitte on an uncompromising search to unearth the vocal, intellectual and emotional essence that made her one of the most popular entertainers in France of
the ‘60s and ‘70s. Reality and fantasy merge into one, as she 'becomes' Barbara in the finest of method-acting traditions. Co-written by Amalric with his On Tour (AF FFF2011) collaborator Philippe Di Folco, this enigmatic experiment dextrously intercuts archival footage of Barbara (born Monique Serf) alongside Balibar’s on-screen portrayal and, in the process, showcases the singer’s immense talent and irrefutably mesmerising catalogue of torch songs.