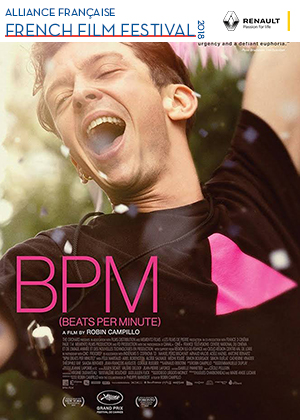 Writer-director Robin Campillo’s BPM (Beats Per Minute) throws us into the milieu of sexual and political activism during François Mitterrand’s Government of the early 90's. As seen through the prism of the ACT UP movement in Paris, this film passionately illuminates the fight for
social acceptance by people living with HIV in the face of drug manufacturers reluctant to expedite treatment breakthroughs.
Nathan (Arnaud Valois) joins the ACT UP collective and is immediately drawn to the radical and somewhat militant Sean (Nahuel Pérez Biscayart, If You Saw His Heart, AF FFF2018), a 20-something man living with HIV. As their
relationship develops, and Sean’s condition deteriorates, BPM evolves skilfully from documentary-style to intimate drama, in a way that has captured the hearts of audiences across France.
Evoking Larry Kramer’s pivotal The Normal Heart, Campillo draws on his own experiences as a member of ACT UP to imbue BPM with a sensuous depiction of the compromised – but still active – sex lives of the group. He adds an undeniably visceral human aspect to their ideological 'raison
d’être': access to fair medical and social treatment in the public eye, and to love sans fear.