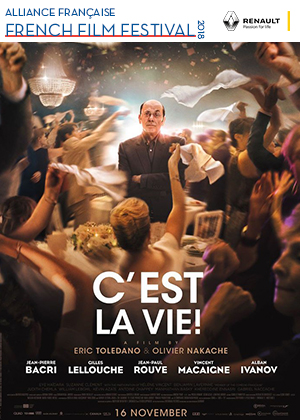 The dynamic directorial duo behind the 2011 smash The Intouchables – Éric Toledano and Olivier Nakache – reunite for the Opening Night film C’est la vie!, in which a wedding threatens to erupt into an utter nightmare for the party’s cantankerous planner, Max. Over a career spanning more than 30 years, Max Angély (Jean-Pierre Bacri, for whom the role was penned) has enjoyed a celebrated career as a caterer and event organiser. Today, it’s all hands on deck for Pierre and Héléna’s nuptials in a breathtaking 17th century French chateau. As per usual, Max has everything precisely organised but, as the celebrations get underway, Murphy’s Law takes over, and his perfectly planned occasion risks disintegrating into a chaotic farce. Can Max and his team pull together to make Pierre and Héléna’s special day memorable for
all the right reasons? The Closing Night film at the 2017 Toronto International Film Festival, C'est la vie! is a carefully crafted, character-based rom-com loaded with witty zingers. A hypnotically jazzy soundtrack and top-notch ensemble cast – including Gilles Lellouche (The Connection, AF FFF2015) as the scenestealing DJ James – seals the deal on what is shameless fun from go to whoa.