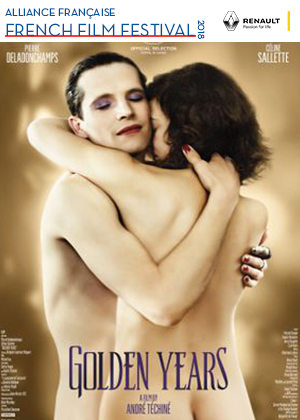 One of the respected elder statesmen of French cinema André Téchiné (Being 17, AF FFF2017) presents a vibrant and youthful retelling of a true love story plucked from the vestiges of WWI, narrated by Michel Fau (Marguerite, AF FFF2015) Paul (Pierre Deladonchamps) and Louise (Céline Sallette,
A Castle in Italy, AF FFF2014; One of a Kind, AF FFF2015) marry on the eve of war, just as Paul is conscripted into battle. Distressed by the atrocities of combat and eventually injured, Paul makes the decision to flee the military infirmary and return to his bride. But when hiding in the basement
becomes too restrictive, Louise is prompted to devise a plan to dress Paul as a woman so he may move around in public. The direct opposite of wartime machismo, Suzanne – as Paul chooses to call his alter ego – is gentile and feminine, and Paul easily loses himself in this new gender identity. His
journey as Suzanne introduces a cabaret and stage leitmotif into the film, one that infuses an unexpected element of glamour into this wartime allegory.
Even when granted amnesty, returning to his male self is not a natural assumption for Paul; for him, Paul and Suzanne are now one and the same, with Suzanne possibly being an even stronger version of himself.