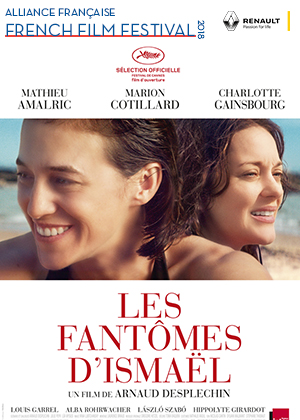 The Opening Night Film at the 2017 Cannes International Film Festival, Ismaël’s Ghost features a love triangle of powerhouse performers – Mathieu Amalric, Charlotte Gainsbourg and Marion Cotillard – in what is essentially
a haunting, anxiety-laden identity thriller from the fertile imagination of writer-director Arnaud Desplechin (My Golden Days, AF FFF2016) Filmmaker Ismaël (Mathieu Amalric, Barbara in this year’s AF FFF) is in pre-production for his next film based on the life of diplomat, Ivan (Louis Garrel, Saint Laurent, AF FFF2015). His happy existence with astrophysicist girlfriend Sylvia
(Charlotte Gainsbourg, 3 Hearts, AF FFF2015) is shattered when his past love, Carlotta (Marion Cotillard, From the Land of the Moon and Inception, Dark Knight Rises), mysteriously re-appears after a lengthy absence in which she had been missing, presumed dead. Little is as it appears to be on the surface in this richly layered and genre-twisting film that keeps the audience
guessing until the end. It also marks the seventh collaboration between writer-director Arnaud Desplechin and actor-director Mathieu Amalric, paying testament to the artistic rapport between these two great figures in French filmmaking.