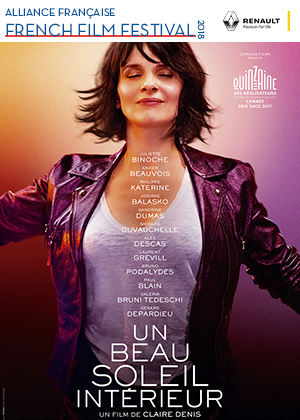 FFF18 Let The Sunshine In

A film that perfectly mirrors the inner turmoil of older female singledom, Let the Sunshine In shines bright in star-power. Not only does the whole storyline orbit around a radiant Juliette Binoche (The Wait, AF FFF2016; Polina, AF FFF2017) at her very best, but this is a women’s film behind the camera too. Iconoclast Claire Denis (Beau Travail, 1999; Trouble Every
Day, 2001; Friday Night, 2002) sits in the director’s chair, having penned the script with novelist-playwright Christine Angot, and ably assisted by her frequent cinematographer, Agnès Godard. Denis introduces us to Isabelle; a 'divorcée' with a child who is searching for love but finding only callous suitors whose actions lend her experiences an acid-laced comedic edge.
Fans of Denis will note that her hot-blooded sensuality and precision-point scrutiny of human nature take this film beyond regular rom-com territory into something far more prescient; reality without the pessimism.
Giants of the screen – including Valeria Bruni Tedeschi and Gérard Depardieu – make colour cameo appearances throughout, but in the end, Let the Sunshine In is Juliette Binoche’s film, and one in which she is an absolute pleasure to behold.