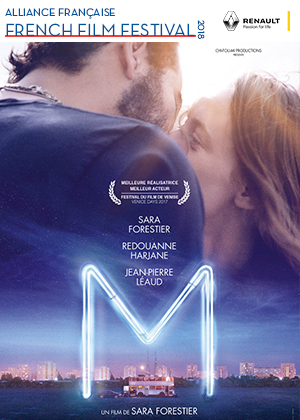 César-winning actress for Games of Love and Chance (2003) and The Names of Love (2010), Sara Forestier (Elementary, AF FFF2017), debuts as actor-writer-director with M; a feature entrenched in the popular storytelling trope of "opposites attract" but overhauling it in a refreshing new fashion.
Teenager Lila (Sara Forestier) meets 30-something Mo (Redouanne Harjane) at a bus-stop and the two make a connection, despite him being a chatter-box and her unable to say a word due due to a debilitating speech impediment. She is studying for exams. He illegally races cars for a living.
Yet somehow – for some reason – they fall in love. But Mo carries a secret burden. A love story with unique lovers, M is notably classical in
its romanticism and structure; something of a modernday western, as its filmmaker likes to describe it. But it is also a film where both the harshness and comedy of unconventional love co-exist, proffering the audience with
a range of swinging emotions. M serves as an enlightening debut for Sara Forestier, who is one of the most prodigious talents of the French cinema
landscape.