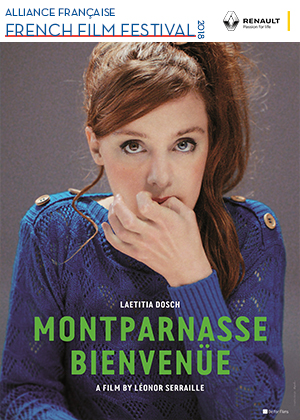 As a debut writer-director, Léonor Serraille – utilising an almost entirely female crew – premiered impressively in Un Certain Regard at the 2017 Cannes Film Festival and Cannes Caméra d’Or, with this witty and highly watchable drama about a spirited 31-year-old woman trying to re-establish herself in the Left Bank Parisian neighbourhood of the title. “I’m not bright but I’m honest,” is one of the things Paula (Lætitia Dosch, also appearing in 4 Days in France in this year’s Festival) proclaims about herself on her return to Paris after an extended jaunt abroad. She is broke, her old boyfriend has little time (or accommodation) for her, and she really needs to get a job. But there is a duality to Paula and, as much as she acts like a child, facing certain adult responsibilities brings out something else in her. Hinging on the infinite appeal of its leading lady, Lætitia Dosch, Montparnasse Bienvenüe is a finely sketched portrait of a very particular type of female character; one who both surprises and unsettles us. Paula’s gradual metamorphosis lays testament to its new filmmaker’s ability to create characters of considerable nuance that also fly in the face of cliché.