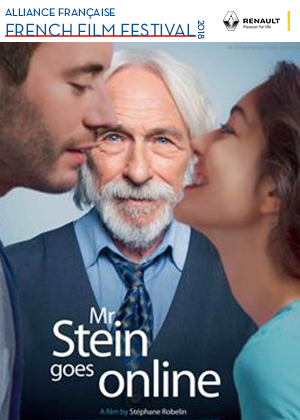 In a riotous new millennial twist on the Cyrano de Bergerac story, writer-director Stéphane Robelin (All Together, 2011) creates a dream role for one of France’s supreme elder farceurs, the formidably talented Pierre Richard (The Tall Blond Man with One Black Shoe, 1973; The Fugitives, 1986).
Pierre is a retired widower who hasn’t left his house for two years. On the insistence of his daughter, he learns how to indulge in the delights of the Internet, thanks to some patience from a young man, Alex (Yaniss Lespert, What’s in a Name?, 2012), who is hired as Pierre’s computer tutor. On a dating site, Pierre meets the young and gorgeous ‘flora63’ (Fanny Valette, Little Jerusalem, 2005) who wants to meet him. But, given Pierre has used Alex’s headshot for his profile, he needs to convince Alex to take his place at
the rendezvous. From Brussels to inner city Paris, Mr Stein Goes Online serves
up generous helpings of laughter, not to mention giving a nod of approval to the older generation and the powers of verbal seduction. The joke of including a string version of Daft Punk’s hit ‘Get Lucky’ will not go unnoticed.