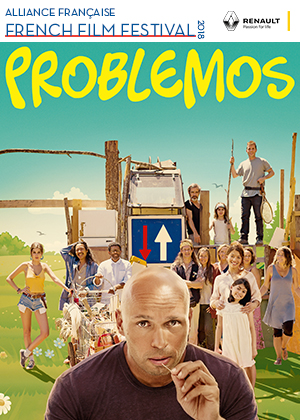 Éric Judor – one half of the enduring comedy duo Éric et Ramzy – directs and stars in this hilarious apocalyptic romp. Cultures and ideology collide as a chic Parisian couple find themselves stuck in a hippie community at a time when a deadly pandemic wipes out civilisation. Returning to Paris after a brief holiday, Jeanne (Célia Rosich) and Victor (Éric Judor) stop off to visit their friend Jean-Paul (Michel Nabokoff) who lives in a commune where individuality, gender distinctions and technology are anathema. Their arrival coincides with the inhabitants’ fight against the construction of an aquatic park in the region. One morning, the community wakes to discover the riot
police are gone. But their joy quickly turns to despair when they realise the trending hashtag ‘Panda Mix’ is not the latest hot DJ from Paris. The future of humanity seems to rest with this radically militant but musingly eccentric group of misfits.
Featuring a stellar ensemble cast – including the film’s co-writer Blanche Gardin – Problemos is a witty Age-Of-Aquarius-meets-The-Walking-Dead comedy caper for Francophiles seeking the lighter side of contemporary
French cinema.