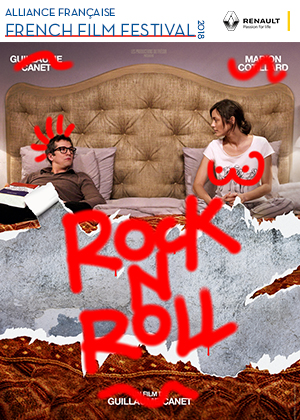 Fact meets fiction in the latest comedy from Guillaume Canet (French Riviera, AF FFF2015; director of Tell No One, 2006; and possibly best-known to English language audiences from Danny Boyle’s The Beach, 2000) where he self-deprecatingly turns the camera on himself in something like a French version of Larry David’s Curb Your Enthusiasm. Guillaume Canet is Guillaume Canet, now aged 43, and married with a son to his real-life partner, Marion Cotillard. When he starts shooting a movie for his friend, Philippe
Lefebvre, in which he stars across from model-turnedactress Camille Rowe, he realises he is not "rock‘n roll" enough for the younger generation.
This realisation turns into an obsession that sends Canet on an ego trip into the ridiculous. Cotillard is too embroiled in her own career to take notice (with a running gag that won’t be lost on non-French speakers, where she’s trying to perfect a Quebecois accent); that is, until Canet goes that
one step too far. Featuring a veritable line-up of star cameos – including
Gilles Lellouche, Yvan Attal and the great ‘60s pop star, Johnny Hallyday (who only passed away in December 2017) – this is a raucous and fun satire from one French celebrity who isn’t afraid to poke fun at himself.