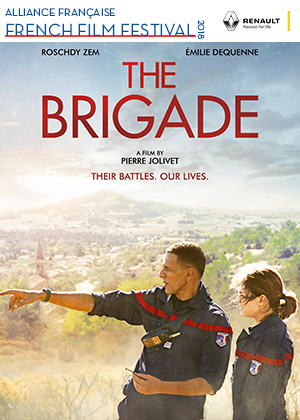 The Brigade is the work of César-nominated actor, writer and director Pierre Jolivet; a 'vérité-styled' glimpse into the mechanics of a working fire station in rural France, where life and death are an intrinsic part of the normal working day. Bénédictine (Émilie Dequenne) is a tough female firefighter
transferred to a 'caserne de pompiers' near the southern town of Carcassonne, led by the stoic but kindhearted Philippe (Roschdy Zem). When she makes some critical errors supervising her first emergency response,
Benedictine finds herself offside with her unforgiving and
tough male colleagues. A series of crippling bushfires suggests that an arsonist is on the loose during what is an unusually hot summer.
Can Philippe unite his team of brazen and courageous firefighters?
Or will the tensions running rampant through this small station endanger the community they’re meant to protect? Magnificently depicting the scorched-earth landscapes of the Languedoc region, The Brigade graphically uses its 'mise-en-scène' to illustrate the extreme conditions faced by
Philippe and his crew. By removing the heroic façade, we see all the tensions, tears, successes and failures that are part and parcel of France’s first responders.