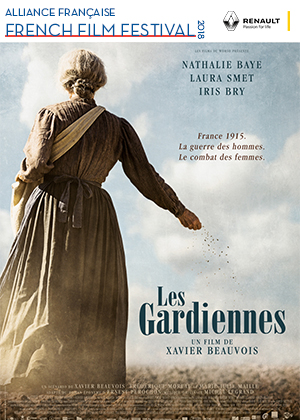 Having won the Grand Prix at Cannes in 2010 for Of Gods and Men, writer-director Xavier Beauvois (also performing in Let the Sunshine In and Bright Weakness in this year’s Festival) continues his awards-worthy form with this masterful work of restraint that cuts deeply into an emotionally affecting vein. Adapted from the novel by Ernest Pérochon, The Guardians covers many years on the Paridier farm, beginning in 1915 when the men must leave for war. The matriarch of the household, Hortense (Nathalie Baye, Moka, AF FFF2017; It’s Only the End of the World, AF FFF2017), rallies her daugher, Solange (Laura Smet), and new farmhand, orphan Francine (newcomer Iris Bry in a revelatory performance), to shoulder the back-breaking
farm duties. In this visually sumptuous pastoral setting, the women learn
self-sufficiency, despite the hardships, and even fall in love. It all culminates in a final scene that acts as a fitting homage to the closing moments of Stanley Kubrick’s classic, Paths of Glory. Rarely does contemporary cinema employ such subtlety, which makes The Guardians a triumph of less-is-more, eschewing hubris and unnecessary histrionics. The sweeping melodies of
distinguished French composer Michel Legrand (The Umbrellas of Cherbourg, 1964; The Young Girls of Rochefort, 1967) help elevate this film to utter brilliance.