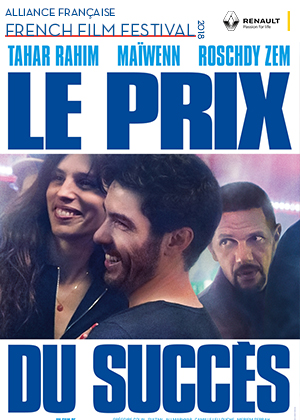 FFF18 The Price of Success

With his second venture into writing and directing after 2011’s Jimmy Rivière, Teddy Lussi-Modeste looks at how the bright lights of stardom can irrevocably tear a family to shreds; in particular, the professional and private bond between two brothers. Also, the screenplay was co-written by Rebecca Zlotowski (Planetarium, guest AF FFF2017). Hailing from a modest, working class background, Brahim’s (Tahar Rahim, Daguerrotype, AF FFF2017) rise to fame as a stand-up comedian has been swift, and largely orchestrated
under the eye of his more volatile older brother, Mourad (Roschdy Zem, director of Chocolat, AF FFF2017). The introduction of Brahim’s girlfriend, Linda (Maïwenn, director of Mon Roi, AF FFF2016; Polisse, 2011) into the dynamic, sets off a chain of events that see the brothers careening towards
devastation. But is the success worth the cost? As a non-comedy about comedy, there has been some speculation The Price of Success is loosely modelled on a real-life comedian, possibly even Franco-Algerian star
Jamel Debbouze (Amélie, 2001). However, regardless of its inspiration, this is a film that manages to push at audience expectations, culminating in an intense climax that is almost apocalyptic in terms of the price Brahim has to pay.