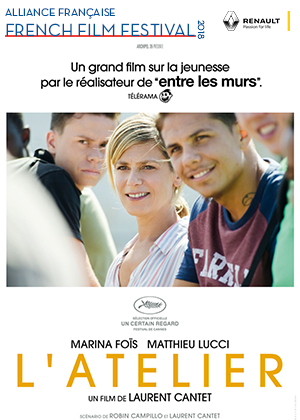 Laurent Cantet, director of 2008 Palme d’Or-winning docudrama The Class, makes an enthralling return to form with The Workshop; a topical fusion of political debate and socialconscious thriller, hot off its Un Certain Regard Premiere at Cannes Film Festival. It is summer in La Ciotat in the South of France. Antoine (played by newcomer Matthieu Lucci) is taking part in a creative writing workshop run by novelist Olivia (Marina Foïs, Happy Few, AF FFF2011; Papa ou Maman, AF FFF2016). Smart and loaded with teen angst, Antoine’s fascist sympathies lurk just beneath the surface and create
friction within the group. However, Olivia is both alarmed and captivated by Antoine's hostility and, as the workshop and its pupils gradually slip out of her control, her interest goes beyond mere intrigue into a fascination that is both intellectual and, at times, seductive. Collaborating again with the co-writer of the The Class, Robin Campillo (who took Cannes by storm with BPM, also appearing in this year’s Festival), Cantet continues a predilection for dark, character-based storylines, tapping into the zeitgeist of fear and unease that is present in France today.