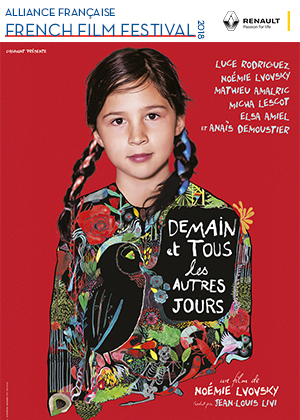 The Opening Night film of the 2017 Locarno Film Festival in Switzerland, Tomorrow and Thereafter sees popular French thespian Noémie Lvovsky (from the 'très' successful Rosalie Blum, AF FFF2016 and La Belle Saison, AF FFF2016) – who holds the record of six César Award nominations for Best Actress – accept the daunting responsibility of writing, directing and acting, while also sharing the limelight with a child and owl. Seen from this child’s perspective, Tomorrow and Thereafter pits the pint-sized Luce Rodriguez in the central role of Mathilde; a precocious nine-year-old living in a Paris
apartment with her mentally fragile mother (Noémie Lvovsky); her best friend being a feathered one. Although Mathilde is still in regular contact with her father (Mathieu Amalric, appearing in five films in this year’s Festival), it is the unique connection with her mother that colours Mathilde’s world. The mother, father and owl roles in Tomorrow and Thereafter remain unnamed throughout, which has the effect of turning the spotlight squarely on the character of Mathilde and the extraordinary performance of Luce Rodriguez – definitely a name to watch – who more than holds her own, despite performing alongside some of the strongest names in French
cinema today.