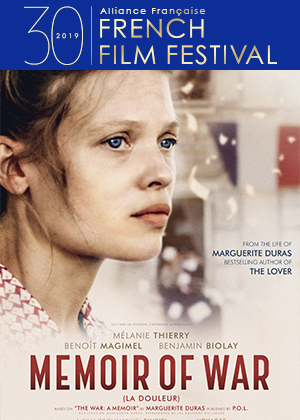 Published in 1985 and translated into fifteen languages, Marguerite Duras’ LA DOULEUR (PAIN) is considered one of the great literary works of the 20th century – a searing recollection of her experiences in Paris during the Second World War. Adapting such a work for the screen is an ambitious undertaking, and one that has garnered its fair share of controversy under the directorial gaze of Emmanuel Finkiel.

It is 1944. Marguerite Duras (Mélanie Thierry) remembers her past as a Resistance member in Nazi-occupied France with her husband, Robert Antelme, and the unbearable pain of waiting after the Gestapo deports him. She throws herself into a desperate struggle to secure his return.

In doing so, Duras plays a dangerous game of cat-and-mouse, including a chilling relationship with a local Vichy collaborator, Rabier (Benoît Magimel), whose motives are unclear and suspicious.

Visually, this is an epic, heartrending depiction of sorrow and the lengths one woman will endure to be reunited with the man she loves.