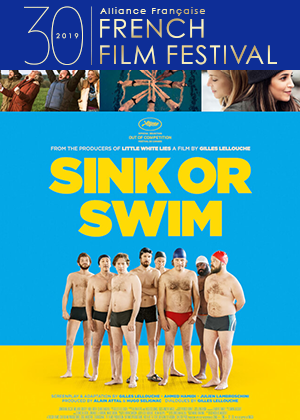 Actor-turned-director Gilles Lellouche (In Safe Hands (Pupille) at this year’s Festival) has pulled off a box office coup with his directorial debut, Sink or Swim – almost four million ticket sales, an even bigger hit than C’est la vie! (AF FFF2018) in which he starred – and a standing ovation at the film’s premiere at Cannes.

A disparate group of 40-somethings – all in the throes of mid-life crises – form a localswimming pool’s inaugural, males-only synchronised swimming team. Staring down ongoing ridicule and contempt from all angles, they engage a fallen champion, Delphine (Virginie Efira, In Bed With Victoria, AF FFF2017; An Impossible Love and Keep Going at this year’s Festival) as their coach, supported by her tough-as-nails former swim partner, Amanda (Leïla Bekhti, A Man in a Hurry at this year’s Festival). Unwittingly, the team members embark on an unlikely journey of redemption that sees each one of them rebuild some sense of their self-worth.

Despite thematic comparisons to 1997’s hugely successful British comedy, The Full Monty,Sink or Swim is an unashamedly French take on the challenges of 21st century masculinity. Stripped bare, this film embodies a good old-fashioned underdog-overcoming-the-oddstale told to perfection.