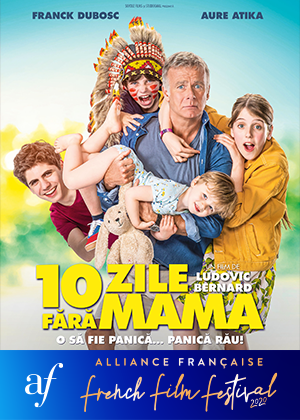 It’s one thing to be a hotshot at work – but can a successful corporate businessman make the transition to managing the family home? The often invisible, thankless work of keeping the domestic machine running smoothly proves an endless source of hilarity in 10 Days without Mum from director Ludovic Bernard (AF FFF19, In Your Hands).

Antoine (Franck Dubosc, AF FFF19, Rolling to You; AF FFF15, Barbecue), a human resources director at a large corporation, is on the verge of a career-making promotion. But, at the same time, his wife, Isabelle (Aure Atika, AF FFF13, Another Woman’s Life; AF FFF12, The Skylab), announces she is taking a well deserved break from her home duties.

Even though Isabelle leaves Antoine with detailed instructions, on how to manage the day-to-day chores, he moves from one disaster to another. Can the family survive without their mother, even for just 10 days?

A wild, crazy comedy about the everyday highs-and-lows of managing kids, underneath the laughs of 10 Days without Mum lies a sharp critique of gender roles, and how success is measured differently for men and women. Played to perfection by Dubosc, Antoine’s surprise at just how hard it is to play housekeeper is complemented perfectly by the outrageously inventive new ways his children find to test his patience.