FFF20 Alice and The Mayor 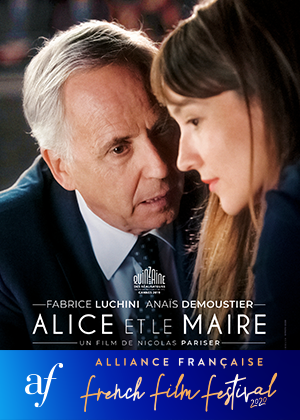 Crackling with electric dialogue, the world of politics has never exploded off the screen with more force than Alice and the Mayor. In this simultaneously hilarious and poignant drama, writer/ director Nicolas Pariser drills deeply into the generational tensions that mark contemporary politics. Not surprisingly, such a compelling film has stormed festivals around the world – from Spain to Canada – and formed part of the Official Selection in the 2019 Cannes Film Festival’s revered Directors’ Fortnight.
After 30 years in politics, the Mayor of Lyon, Paul Théraneau (Fabrice Luchini, also in The Mystery of Henri Pick screening at this year’s Festival), suffers an existential crisis and turns to passionate, young philosopher, Alice Heimann (Anaïs Demoustier, AF FFF18, Jealous) for help. While the power balance appears uneven at first, once Mayor Théraneau and Alice enter the political arena, the result is a captivating debate between two very worthy opponents. With Alice and the Mayor, Pariser forces us to question the foundations upon which politics are built, and reveals his canny ability to produce sophisticated stories based on the power of language.
A timely reminder that inspiration, creativity and a renewed sense of purpose can be found by subverting one’s way of thinking and perceiving the world, Alice and the Mayor is as rousing as it is provocative.