FFF20 Farewell to the Night 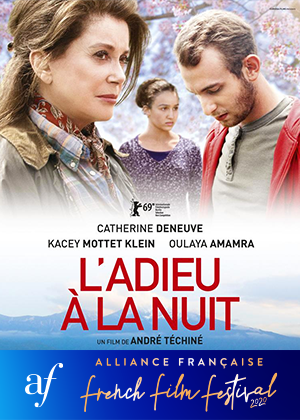 The fearless drama Farewell to the Night combines the talents of two of the biggest names in French cinema, acclaimed director André Téchiné (AF FFF18, Golden Years; AF FFF17, Being 17) and his long-term partner and iconic actress Catherine Deneuve (also appearing in Donkey Skin, Happy Birthday and her first collaboration with Téchiné Hotel America at this year’s Festival).

Through an intimate lens, Téchiné looks deeply into the personal experiences behind the headlines, with an unflinching exploration of a woman called Muriel played by superstar Catherine Deneuve. Muriel works hard running her cherry farm and horse-riding school, earning a coveted place in the loving local community where life seems idyllic. With the arrival of Muriel’s grandson, however, things are turned upside-down. Alex (Kacey Mottet Klein, AF FF17, Being 17; AF FFF13, Sister) has been radicalised by his girlfriend, Lila (Oulaya Amamra, AF FFF19, The World Is Yours), and plans to fight for ISIS in Syria, leaving Muriel grappling with what to do.

In Farewell to the Night, Téchiné and Deneuve strike a nonjudgemental tone, sincerely ruminating the difficult decisions that Muriel faces. A thoughtful, humane exploration of a challenging and topical subject, Farewell to the Night is a powerful reminder that the personal and the political are often inextricably entwined.

"“Farewell to the Night is exceptionally well-told, and it takes a tremendous amount of skill to make it seem this effortless.”"

French and Arabic with English subtitles