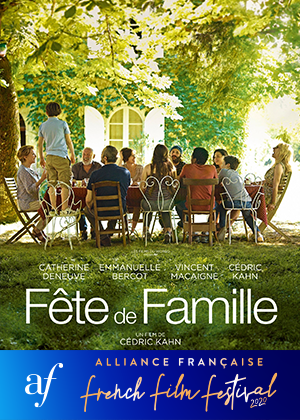 Confirming her place as the reigning queen of the French screen in Hirokazu Kore-eda’s recent French-language film, The Truth (La vérité), Catherine Deneuve is equally as impressive and funny in Happy Birthday – a tight-knit drama directed by and costarring Cédric Kahn (AF FFF10, Regrets; AF FFF06, L’Avion) about a family turned upside-down when faced with an unexpected mental health crisis.

During the 70th birthday celebration of Andréa (Catherine Deneuve, Farewell to the Night and classic Donkey Skin screening at this year’s Festival), sibling rivalries, tensions and jealousies threaten to destroy what should be a happy occasion.

An emotional, moving depiction of a family in turmoil, Kahn brings a deliberately theatrical quality to Happy Birthday, highlighting the explosiveness of secrets that have remained carefully hidden for years.

"“Between fantasy and tragedy, Cédric Kahn’s chamber film plunges into the troubles of a family, scratching beneath the surface of mere appearances” "