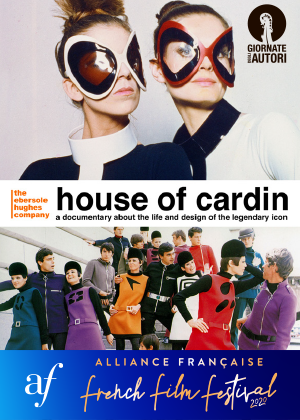 Strike a pose on the catwalk with P. David Ebersole and Todd Hughes’ captivating cinematic illustration of one of the world’s greatest fashion designers, Pierre Cardin. While his name is synonymous with glamour, refinement and sophistication, House of Cardin provides a rare peek behind the dressing room curtain into the world of the man himself.

Granting the filmmakers unprecedented access to his personal archives, the film traces Cardin’s origins, beginning in the Italian countryside in the early 1920s before moving to France where he made his name in fashion.

Cardin’s first fledgling steps into the industry saw him work on costumes for Jean Cocteau’s legendary film Beauty and the Beast (1946). Following his later collaborations with Christian Dior, House of Cardin documents the eventual establishment of Cardin’s own label. By doing so, it highlights Cardin’s radical approach to ready-to-wear fashion, setting a global trend to make designer labels more accessible.

Combining business savvy with a creative vision like few others, House of Cardin is a celebration of a true French fashion icon. Featuring a cast of equally celebrated names – from Alice Cooper to Jean-Paul Gaultier, Sharon Stone to Naomi Campbell – this serves as an affectionate memoir to fashion and a French national treasure.

"“Through a terrific combination of archival footage and talking-head interviews, Ebersole and Hughes suggest something of the creative genius of Cardin”"