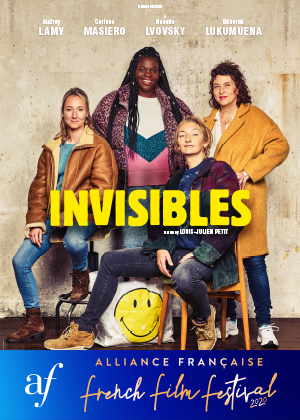 An illegal women’s shelter set to shut down in economically struggling Anzin might not be the typical milieu for a soul-enriching comedy, but Invisibles surprises in more ways than one. Based on Claire Lajeunie's novel Sur la Route des Invisibles, director and co-writer Louis-Julien Petit’s box office hit has touched the hearts of audiences around the world with its upbeat humour and optimistic spirit.
The film’s ‘invisible’ people are the social workers and homeless women whose lives are rocked by the shelter’s imminent closure. Audrey (Audrey Lamy), Manu (Corinne Masiero), Hélène (Noémie Lvovsky) and Angélique (Déborah Lukumuena) make up the centre’s staff who turn to unorthodox methods of protest when their achievements are ignored by bureaucrats.
Despite the sense of hope that runs throughout his film, Petit does not shy away from harsh realities, selecting almost all of his cast from 150 women actually living on the streets. Complementing an impressive ensemble of professional actors, it is the authenticity and warmth of these women that give depth to the film’s light-hearted surface.

Through humour, Petit is able to navigate very acute and humane issues, demonstrating that a social vision and a good laugh are sometimes the perfect match.

""A universal underdog vibe gives this consistently funny look at daunting circumstances the potential to travel and touch audiences far and wide.""