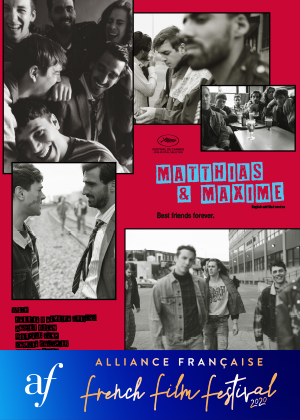 With its World Premiere at the 2019 Cannes International Film Festival, the light-hearted romantic drama Matthias & Maxime is multi award-winning Québécois filmmaker Xavier Dolan’s 8th film in 10 years, made all the more impressive by the fact that he is only 30 years old.

The openly gay Dolan (AF FFF17, It’s Only the End of the World; AF FFF13, Laurence Anyways) returns to the subject of sexuality and identity with two straight best friends in their 30s. On a weekend away with their all-male crew of long time friends, crisp lawyer Matthias (Gabriel D'Almeida Freitas) and the more overtly damaged, hard up Maxime (played by Dolan himself) are inevitably inveigled into acting in a student short directed by a pal's bratty younger sister. Reluctantly, anxiously, they go ahead with it and learn only after committing that the film requires them to kiss. A kiss is just a kiss but the on-screen intimacy unleashes long-repressed feelings between the two.

With Matthias & Maxime crowning an already awe-inspiring body of work, Dolan has already accomplished more than some filmmakers will in an entire lifetime. Dolan’s films are marked by their fearlessness in revealing the best and worst of the human spirit. He is a true cinematic visionary and this is yet another unmissable masterpiece from a filmmaker who is going from strength to strength.

"“Dolan remains an unabashed sensualist, then, flooding his screen with feeling in the tangible form of sound and colour.”"