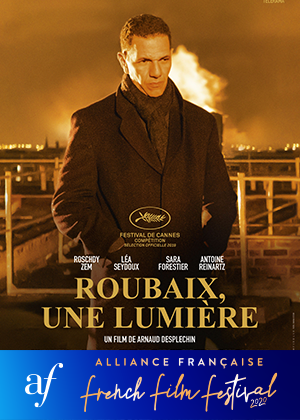 Competing in the 2019 Cannes Film Festival for the Palme d’Or, Oh Mercy! is the latest film from Arnaud Desplechin (AF FFF18, Ismael’s Ghosts), a true-crime film offering a dark, yet compassionate, exposé of the flawed human condition.
Starring a cast of familiar faces, it is a notable addition to the extraordinary career of French actress Léa Seydoux who has reached international stardom in films such as Yorgos Lanthimos’s The Lobster, 007 Spectre and 2020's No Time to Die. With all the elements of a police procedural, holding things together at this Lille police station is captain Yakoub Daoud (a superb performance by Roschdy Zem, AF FFF18, The Price of Success and The Brigade). Alongside the inexperienced Lieutenant Louis Cotterel (Antoine Reinartz), Daoud squares off with the prime suspects in a brutal murder case: Claude (Léa Seydoux, AF FFF17, Farewell, My Queen; AF FFF15, Saint Laurent) and Marie (Sara Forestier, AF FFF18, M; AF FFF17, Elementary). Inspired by Mosco Boucault’s 2008 television documentary on the true story Roubaix, commissariat central, affaires courantes – which gives this film an added touch of authenticity – Oh Mercy! reveals why Desplechin remains one of the most enduring filmmakers working in France today.
Heartfelt drama combines with true crime thrills to ask the important questions about presumptions of guilt and innocence.

"“Arnaud Desplechin returns to his birthplace to tell a story about a place that few people got to choose, and even fewer get to leave.”"