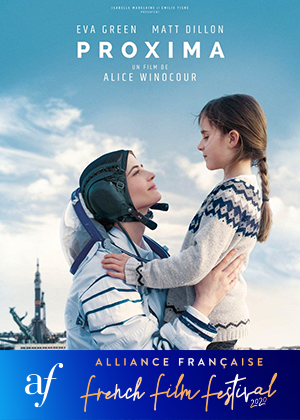 With its world premiere at the 2019 Toronto International Film Festival, where it was awarded an Honourable Mention by the Platform Prize Jury, Alice Winocour’s (AF FFF 13, Augustine) Proxima is a compassionate drama about a career driven woman forced to choose between her work and her child.

As the only woman in the European Space Agency astronaut training program in Cologne, single mother Sarah (Eva Green) struggles with feelings of guilt over the limited time spent with her young daughter, Stella (Zélie Boulant-Lemesle).

When Sarah is invited upon a year-long space mission ‘Proxima’, tensions escalate and her insecurities about motherhood rise dramatically to the surface. By highlighting the minutiae of Sarah’s training, Winocour shines a light on the risks surrounding such a lengthy, dangerous journey and the powerful implications these have on the already fragile mother/daughter psyche.

Determinedly feminist in its outlook, Proxima demands we take the plight of career women more seriously through its sensitive, intelligent use of drama.

"“Eva Green puts in a career best performance as the astronaut faced with a choice between her ambitions and her only child.”"