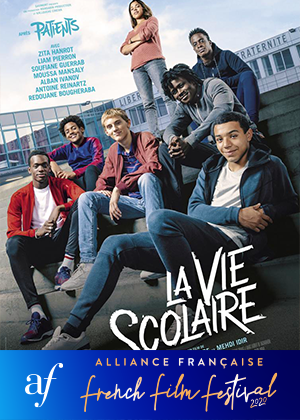 The second feature from Grand Corps Malade and Mehdi Idir focuses on the rough-andtumble life at an urban middle school in Saint-Denis. Seen through the eyes of a young vice principal from South-Eastern France, the directors again deploy comedic relief to drive home important issues facing the education system, echoing aspects of their 2016 blockbuster debut Step by Step.
Despite being thrown in the deep-end when transferred to her new job in Paris’ northern suburbs, Senior Education Adviser Samia (Zita Hanrot) enthusiastically supports her students in the hope of showing them a brighter future. But, in the borough of Seine-Saint-Denis – an area marked by extreme poverty and high immigration – hope is a rare commodity.
César-winning actress Hanrot fronts a strong cast – including Liam Pierron, Soufiane Guerrab and Alban Ivanov (the latter also appearing in The Extraordinary in this year’s Festival) – building on the filmmakers’ painstaking research and shared memories of going to school in the 1990s. Their determination to make meaningful cinema that speaks to the real experiences of real people is given much-needed optimism, intelligence and humour. Genuine and inspiring, School Life is a compassionate peek into an unfamiliar way of life that inspires laughs at every turn.

""The actors compete for punchlines and presence, infusing crazy energy into this social and humanist comedy filmed with rare elegance.""

French and Arabic with English Subtitles