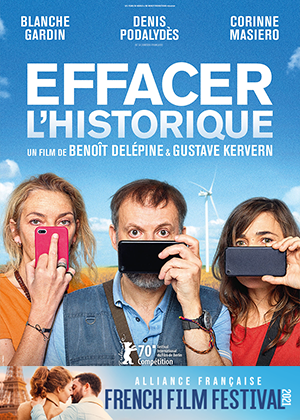 If the complexities of the online world leave you feeling lost, confused or furious then this laugh-out-loud comedy about three middle-aged friends fighting back against the internet is the film for you. It’s the latest by renegade filmmaking team Gustave Kervern and Benoît Delépine who have assembled some of France’s top comedic actors to play the everyday people trying to bring down Big Tech.

Marie (Blanche Gardin, #Iamhere, AF FFF21) is a single parent whose sex tape has leaked online and wants it taken down before her son sees it. Bertrand (Denis Podalydès, Sorry Angel, AF FFF20) has been writing to Facebook asking them to do something about the cyberbullying his daughter is suffering, but to no avail. Christine (Corinne Masiero, Invisibles, AF FFF20) is a driver for a ride share company and can’t handle any more one-star reviews. They are clueless, but they are going to raise hell.

Funny and melancholic, Delete History won the Silver Bear 70th Berlinale prize at the 2020 Berlin International Film Festival and in between fits of laughter it will leave you wanting to press Control-Alt-Delete on your own relationship with the internet.

Persons aged under 15 years must not be present at the relevant showing unless accompanied by an adult.

"Delete History sees Delépine and Kervern at their funniest, largely thanks to sparkling performances from three leads."