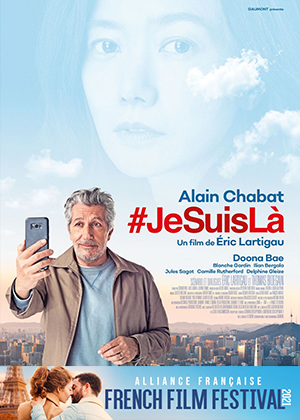 Get ready to embrace the unpredictability of life and celebrate venturing out of your comfort zone in the long-awaited new comedy by Éric Lartigau, the writer/director of the worldwide smash hit The Bélier Family (AF FFF15).

Stéphane (Alain Chabat) is in a rut. Whether it’s his personal life or his career as the head chef at a regional restaurant, everything just feels like it’s on cruise control. One day on Instagram he meets a young Korean woman named Soo (Bae Doona) who he finds he can talk to with ease. Despite their differences, language barrier and living so far apart, they establish a strong bond. Smitten by this mysterious woman, on an impulse Stéphane boards a plane to Seoul to meet her. But when he arrives things don’t go according to plan. Is Soo who she says she is? Has Stéphane just made the biggest mistake of his life?

A winning blend of endearing culture clash comedy and an affectionate portrayal of somebody navigating a middle-life crisis, #Iamhere is a fun and big-hearted film about a man who may have loved not wisely, but too well.