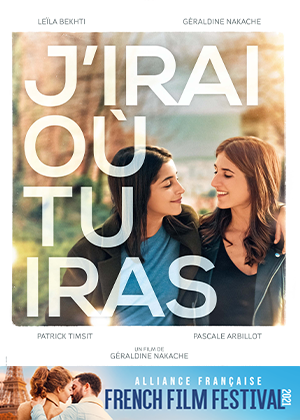 Written, directed and co-starring Géraldine Nakache, I’ll Go Where You Go reunites her with Leïla Bekhti (Sink or Swim, AF FFF19) after their previous smash-hit collaboration, All that Glitters (AF FFF11). I’ll Go Where You Go is the tale of two estranged sisters with a well-meaning father, Léon (Patrick Timsit, AF FFF18’s Closing Night film, 50 Is the New 30), who attempts to heal their sibling divide.

As the movie’s title suggests, this is the second film in this year’s festival to feature the music of Québec’s most beloved popstar, with Céline Dion at the heart of sisters Mina (Bekhti) and Vali’s (Nakache) emotionally uplifting road-trip. Although Mina struggles to cope with Vali’s naïve ambitions to become a famous singer, when their sick father asks Mina to travel with Vali to a career-making audition, Mina reluctantly agrees. Where the adventure leads the estranged sisters will surprise both the family and the audience.

Nakache captures a vital and sincere energy brought to life by Dion’s iconic tunes. In keeping with the songs made so famous by the beloved pop diva, emotions run high in I’ll Go Where You Go, resonating universal themes of family, love and the healing power of great music.

"Nakache injects her films with a seductive aura of narrative continuity."