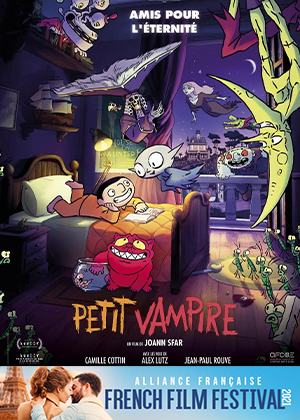 Little Vampire and his human best friend Michel leap from the pages of the best-selling children’s illustrated book series to star in their own film!

The fantastical world of Little Vampire is one of thrilling adventures with an assortment of funny supernatural characters, designed to tickle the funny bones and stir the imaginations of children and families.

Screening in competition at the prestigious Annecy International Animation Film Festival, Little Vampire is also a delight for animation lovers, with its boldly drawn 2D cartoon visual style. Lovers of spooky films will also enjoy its kid-friendly tributes to classic scary films, with a dazzling ensemble of supporting characters that includes a moon headed creature, a mini-Frankenstein’s monster and an undead pirate captain.

Little Vampire is the creation of multi-talented filmmaker and artist Joann Sfar, who is the author of the original books as well as being the director and co-author of this charming new film. A highly prolific and celebrated comic book artist, Sfar’s previous film credits include The Rabbi’s Cat (2011), based on his comic book series, and the imaginative and unconventional Serge Gainsbourg biopic, Gainsbourg: A Heroic Life (2010).

"A funny, warm-hearted and audacious film, buoyed by a gallery of loveable characters."