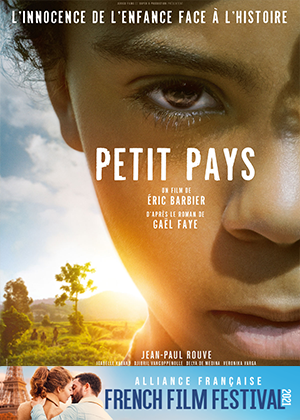 Small Country, an African Childhood is inspired by the incredible true story of a young boy growing up in the small African country of Burundi during the 1990s, whose world was turned upside down by the tidal wave of violence and unrest from neighbouring Rwanda. This powerful and dramatic coming-of-age story puts a much-needed human face on events that we must never forget.

Gabriel (newcomer Djibril Vancoppenolle) is a happy young boy who was born to a French father and a Rwandan mother. Although his family life isn’t perfect, with tensions growing between his parents, Gabriel mostly enjoys his carefree existence of going to school and playing with his friends. Unfortunately, such days are not to last as the Rwandan conflict between the Hutu and Tutsi ethnic groups is becoming increasingly violent and starting to spill over into Burundi.

An adaptation of Gaël Faye’s semi-autobiographical book about his own childhood experiences, which resulted in him having to flee Burundi to emigrate to France, Small Country, an African Childhood offers an invaluable perspective on a devastating chapter of modern history as seen through the eyes of a naïve child, right before his innocence is lost forever.

"A wonderful film, tender and savage at the same time."